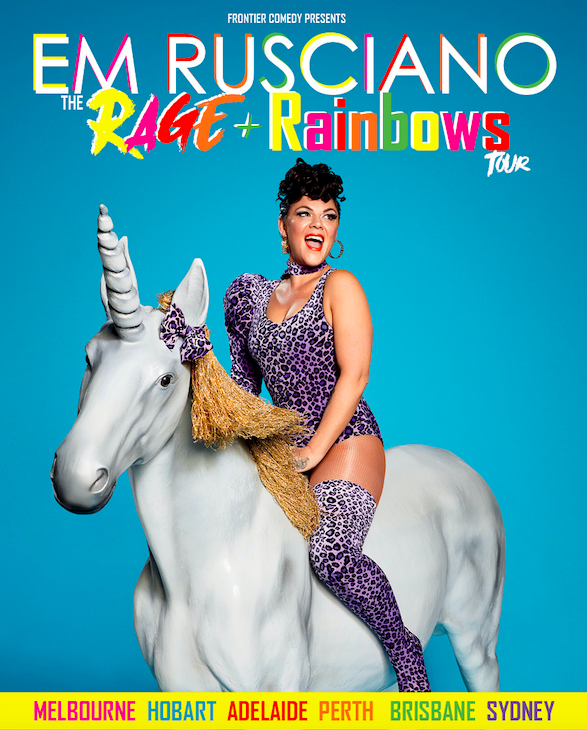 LISTEN TO THE MUSIC
SEE THE DATES AND CITIES

Go on, admit it. That’s the best damn poster you’ve ever seen, isn’t it?! That unicorn was named ‘Gary’ (by my husband Scott) and not only did Gary demand a bow to match my purple leopard print explosion, he also had a fan blowing his mane out like Beyoncé. What a diva. I finally met my match.

Now, about the show.

Why Rage and Rainbows?! Because it’s the two extremes I’ve found myself swinging between over the past year. Because it’s probably what will be written on my tombstone when I die. Because once you get to the other side of anger, good shit is usually waiting for you (i.e a pot of gold. Or a cheeky leprechaun. You never know).

“For ten years, if you asked Em Rusciano how she was, she said, “fine”. Yeah bullshit. She was lying awake at 3am with unexplained rage, and so was EVERY OTHER WOMAN SHE KNEW.

This past year, Em had a baby, turned 40, left her job and had a combined 45 minutes sleep. There’s been next-level rage. There’s also been love. There’s been day drinking and breast feeding NOT AT THE SAME TIME PISS OFF CLICK-BAIT WRITERS.

In the ‘Rage and Rainbows’ tour— Em is finally giving voice that gnawing rage we all try to hide. She’s unleashing it, she’s dunking it in white wine, she’s rolling it in glitter, and giving it an 8 piece back up band and four costume changes.

She’s also going to tell you what to do with it, and send it on it’s way.

More than a show, ‘Rage and Rainbows’ is a festival for anyone who’s felt fed up, furious, exhausted, demoralised… but has still maintained a strong passion for sequins.

I wanted to understand my unexplained anger (look, a lot of it was easily explained, actually – hey family, don’t walk past the dog vomit and tell me there’s dog vomit; PICK THE DOG VOMIT UP). I was feeling the undercurrent of women being fed up with how things were turning out for us not only on a global scale, but also in our own lives.

So I decided to do a deep dive on that rage: I spoke to the Mothers at the school gate, I spoke to the women at the shops, I spoke to men about the women in their lives… and I realised I wasn’t alone. I think it’s time women stop re-packaging their anger to make it more comfortable for everyone else. In the long run, it’s self-harm, and it only hurts the people around us when we think we’re actually protecting them. Can you do a funny show about anger – hell yes! Because if you don’t laugh you’ll cry, right guys?!

So that’s what the show is about.

Rage and Rainbows also has ORIGINAL SONGS. Original, fabulous, sing-along songs, which I got to write with the unbelievably talented Kate Miller-Heidke and her partner Keir Nuttall. Now, listen here: I want you to learn them before the show. Study them. Press play/pause on your stereo and write out the lyrics while lying on your bed with a lollipop, like the good ol’ days. I want you to be able to sing along with me, lighter in the air, hand on your heart. Scroll down for the links to songs.

There’s also some fancy VIP packages available, which makes me feel like Mariah. VIP’s get to do fancy things like see a private sound check party before the show, have a little Q&A, and get some super stylish Merch that I have designed myself. More details via the ticket links on the tour page, or on the Frontier Comedy website.

ATTENTION SYDNEY! There’s been a date change for the extra show we added due to a scheduling conflict. It was announced as Sunday 11th August, but it’s been changed to Friday 9th August (hooray! A non-school night! More wine!) at 8pm, still at Enmore Theatre.

Existing ticket-holders will have received an email from Ticketek to tell you: your tickets are still valid for the Friday show, and you can absolutely get a refund if you need. Fingers crossed it still works for you anyway, and if it doesn’t: I’m SO sorry. I’ll raise a glass in your honour, my loves. Any issues, contact Ticketek or Frontier comedy and they’ll sort you out.

Tickets are officially on sale, and selling fast (no, really. Some of the shows are already sold out. GO NOW. GO GO GO). Click on the button below for your city to be directed to the booking site.

Listen to the songs by clicking on a link below:
iTunes
Spotify
Google Play

So here’s your homework.
1. Book your tickets (on sale now).
2. Learn the songs.
3. Gather your rage, and meet me at the theatre.

I’ve put everything I have into this comedy concert – physically, financially, emotionally, musically, unicornally. I started writing it last year, attempting to get it all finished before my baby was born. Hahahaha. Nice try, Em. I then continued writing it after he was born, breaking every five minutes to breastfeed, eat, cuddle, or scream into a pillow. But I did it. I finished writing the damn show.

I can’t wait for you to see it, dolls. Bring it on. 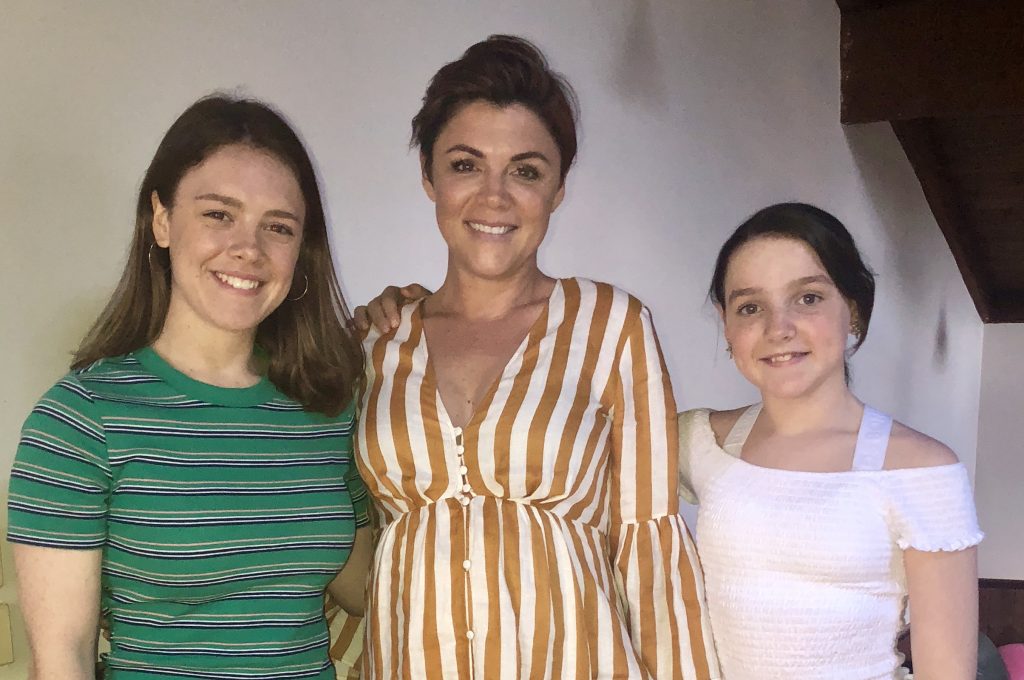