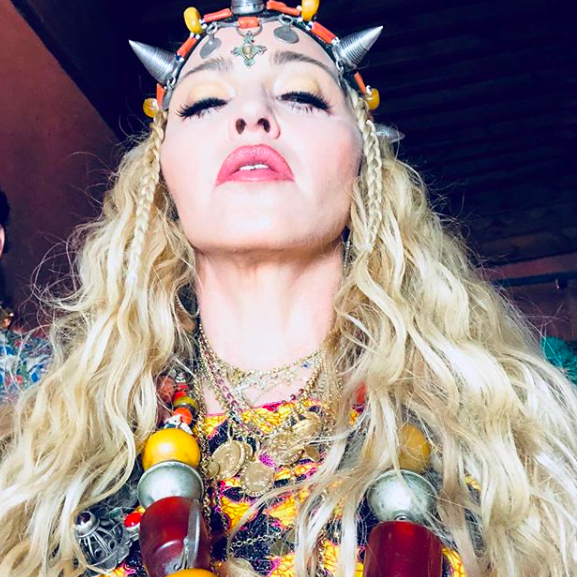 To my real Mother,

Secondly, even though we’ve never met, your influence has permeated and directed my every move since I became aware that you were, in fact, my mum. When I saw you standing naked except for a pair of sky high stilettos and a cigarette dangling between your crimson lips on your Girlie show tour poster — the day I realised who you truly were – I knew that from afar, you would ensure my path in life, by setting a sterling example in your own.

Today I wish to thank you, Madonna Louise Veronica Ciccone, for helping me to become the woman I am today.

Darling Mother, while there is no biological proof of our connection, in my heart I know that in 1978 you made a secret trip to Australia where you met and fell in love with a small, wiry, Italian guitarist named Vincenzo. You had a wild one night stand in a seedy motel room and then 9 months later gave birth to me in a public toilet.

Dad and I have never actually spoken about this, however I can tell by looking into his eyes that that’s EXACTLY what happened.

Mother Madonna, you were the first outspoken, short-haired, muscular Italian woman that I had ever encountered. You were just like me, only you touched your vagina in public way more than I did. You were fierce, unapologetic and didn’t give a f*** about what other people thought of you.

When I was 10-years-old you released Like A Prayer, and it resulted in me setting fire to the lounge room when I attempted to recreate your burning crucifix scene from the video clip. My other Mother was extremely upset with me but I knew that you would’ve approved of the green shag pile carpet being sacrificed for art.

As an 11-year-old, you were the reason I bonded with the AIDS patients at the infectious disease hospital my other Mother worked at. I would hang out with them in the hospice talking only of you. These glorious men of course believed me, and once I told them that you were my real Mother, they would immediately tell me how much we looked alike. See, Mother? We also share that in common; the gay community continue to lie to me, love me and hold my career up as well.

Much like you, I have spent my career being told I am too everything. Too loud, too opinionated, too scary, too strong, too much. I was constantly told that who I was wasn’t right, that I needed to change in order for people to like me. That I was a diva and impossible to work with. I’ve hit rock bottom a few times, just like you, Mum.

But you’ve taught me how to reinvent myself. How to say ‘up yours’ to anyone who dared call you irrelevant. And now, in your 60th year, perhaps unbeknownst to you, you are pioneering how women are traditionally meant to age. I attended your Rebel Heart Tour, and saw you on stage at age 58 doing deep squats with aggressive pelvic thrusts to the beat. It made my knees ache watching (and I have reason to believe you were having your own fun with one of your 27 back-up dancers, you saucy minx). On Instagram I’ve seen you counting down every day to your 60th; you are completely embracing it, and it’s bloody amazing.

When I was a kid and my grandma was 60, she baked for the CWA and had a tight blue perm. I loved her like crazy, but I think your version of 60 is my true genetic calling. You’re not aging disgracefully, as people always joke, hurling comments like “It’s time to put it away love” and telling you to “dress your age”. But who decided that, at a certain point, women have to turn into Mrs Claus? Not you, long lost Mother. Not you.

So happy 60th, my Madonna mum.

Thank you for showing me that it is OK to be both a devoted Mother and on a podium drenched in glitter. That I can remain fiercely myself, and still raise impressive offspring. That women can be powerful, sexy and in control at every age.

Thank you for maintaining the rage you magnificent bitch. Here is to the next 60 years, and to our eventual emotional reunion.

Yours in loyalty, Lycra and love,