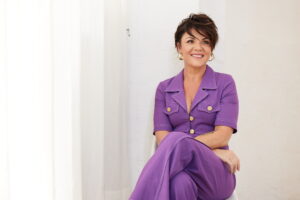 Em Rusciano is one of Australia’s most well-rounded performers. With her finger in every piece of the performing pie, Em has co-hosted breakfast radio, sold out the Sydney Opera House with her live comedy shows, released chart-topping songs, books and audiobooks, and most importantly, wielded a Bedazzling gun like no one else on Earth.

’Twas many moons ago when Em made it into the Top 12 on Australian Idol in 2004. She may have been booted out in ninth position, but her career was only just beginning. Em was quickly snapped up by Austereo, and spent five years in breakfast radio in Adelaide and Perth, before making the move back to Melbourne to try her hand at live comedy.

And what a hand it was.

With sell-out shows around Australia every year of the past five, Em’s stage presence keeps getting bigger. In February 2018, she embarked on the Evil Queen tour, in which she had to add extra shows after the Sydney Opera House, Melbourne Palais Theatre and Queensland Performing Arts Centre sold out in only a few hours. 2019 saw Em’s biggest show and tour yet, Rage and Rainbows. With original songs, a spectacular set and twelve dancing vuvlas Em toured the country encouraging women to embrace their rage. Channel ten came knocking and asked her to film her first ever live comedy TV special. Rage and Rainbows went on to air to huge ratings, and received rave reviews. Oh and she also gave birth to her son Elio – yep it was a big ol’ year!

Then 2020 happened and Em did what she does best, pivot! With Rona halting live performance Em started a podcast with her best pal (screen writer) Michael Lucas, Emsolation was an instant hit debuting in the top five on itunes and Spotify and number one on the comedy charts. With over 300,000 downloads a month, Emsolation has built a loyal and dedicated community that can’t get enough of Em and Michael’s twice weekly pop culture, political and princess chats.

Em’s best-selling first book Try Hard: Tales from the Life of a Needy Overachiever went to the top of the iBook charts before it was even released, with great critical and public acclaim. The self-narrated audiobook version reached the top of the iTunes charts upon release, and was nominated for the ABIA Audio Book Of The Year Award.

Em’s social media community is fierce, loud and passionately loyal. With a Facebook following of 275,000 fans, 32,000 on Twitter and 215,000 on Instagram, she has a weekly social media reach of up to 10 million.

Em is also a regular host of Channel Ten’s ‘The Project’ and can also be seen on ‘Hughsey we have a problem’ and Drunk Histories.

Most importantly, she still finds time to watch every single episode of Ru Paul’s Drag Race. Priorities are essential.

Want to know more? Subscribe to my newsletter below, you sexy jerks.

If you need to make an enquiry, use the form below and you’ll see Mike the tiny unicorn, who poops stars when he flies off…. Why, I hear you ask? Why not?

Organisations I believe in

Here are a few amazing organisations doing fabulous things to better the world for us. Just remember, no matter your situation, there are people out there that can help you. Never be afraid to reach out.

Some kids go to school every day without any lunch to fill their little tummies. The wonderful people at Eat Up are helping battle this by bulking up kids lunchboxes across Australia.

I’ve been a huge advocate for Beyond Blue for years. They offer great resources for anyone affected by mental health issues in any form – not just the individual, but their family and friends as well. Speak up, check in. You are never alone.

This killer organisation has been helping out and empowering women from all walks of life by getting them back into the work force since 2005. They not only transform the woman, they transform their lives.